The 2020 Membership Drive is Underway with Prizes! Join or Renew by January 31, 2020. See Membership Page for Additional Information! Birchleggings Club Annual Award Breakfast Has Been Announced for Sunday, February 23, 2020! The Birchleggings Store has been Updated for 2020. Act Before January 23, 2020 for Borah Birchlegger Ski Wear! Think Snow! 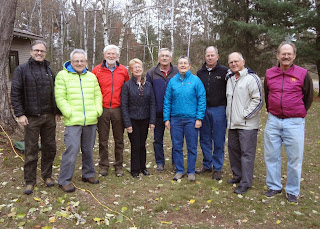 The very first meeting of the Birchleggings Club Board of Directors was held in Eau Claire, Wisconsin on Saturday, November 9, 2013 at the home of Gale Otterholt.

At the meeting the board elected the officers of the club, went through a draft of the bylaws, and developed a committee structure.

After founding and leading the club for many years, John Kotar, who did not run for the board at the annual meeting in September, stepped down as president. Gale was elected the new President of the club. Others officers include Vice President, Tom Rowley; Secretary, Toni Popp; and Treasurer, Dave Balsiger.

Shown in the picture from left to right are Edward Eroe, John, Gale, Toni, Dave, Jeanine Evenson, Tom, Russ Roberts, and Steve Carmazon. Not pictured is Jim Tenorio.
Posted by Edward R. Eroe at 4:34 AM No comments: