The Birchleggings Bell Dedicated and Rings for the First Time!

The Birchleggings Club Bell Dedicated and Rings for the First Time 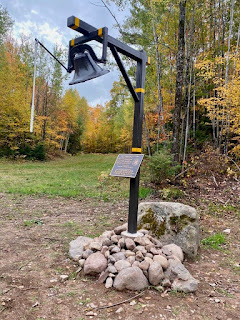 On Friday September 25,2020 the Birchleggings Club Bell was officially dedicated into service. Final steps of the installation happened early in the afternoon.The bell is located about 500 meters west of the Birkebeiner starting line where the classic and the skating trails split.The plaque and bell were installed by Dick Enz, Steve Carmazon, and Jim Tenorio. It was fitting that the bell was made operational by Dick and Steve as Dick brought the idea of the bell to the Birchleggings Club Board of Directors, and Steve selected the quote from Tony Wise that appears on the plaque. 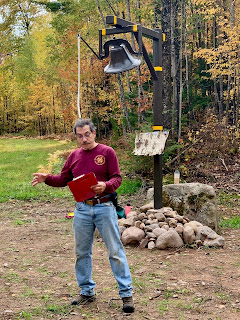 Later that afternoon in a joyful dedication ceremony, John Kotar, one of the original Birkebeiner Founders and the co-creator of the Birchleggings Club gave the bell its first official ring. Approximately 25 Birchleggers, hikers, bikers, neighbors along the trail and friends of Biechleggers attended the bell-dedication ceremony. Board member Paul Thompson officiated.

Genesis of the Bell

Dick Enz opened the proceedings by giving the background of the bell. Dick’s idea for a Birkie bell was inspired by the memorial bell at the Northwood Ski Trails near Rhinelander, Wisconsin. The bell in Rhinelander is a memorial to the late Wayne Fish, a 33-year Birchlegger, who was a model and inspiration for young Nordic skiers in the area. The Birchleggings Club expanded the purpose of the Birchleggings Club Bell to include and honor those persons, past and present, who made, and continue to make the race and the trail world-class attractions.

Making the Bell a Reality 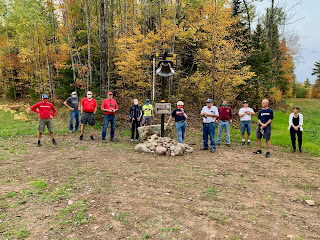 Jim Tenorio, project coordinator, recapped the planning and fabrication and installation of the bell. The entire process from proposal to completion took over a year and a half. The initial idea for a bell was brought to the Birchleggings Club Board in January of 2019. It was accepted as a working project immediately and enthusiastically. A bell was donated near the end of the summer 2019. Design and planning for the post happened during the fall and winter of 2019-20. The post was fabricated during the spring of 2010. It was transported from Menomonie and Eau Claire up to Cable on May 21, 2020 and installation of the bell post took place on August 4 and August 7, 2020.

So Many Persons to Thank 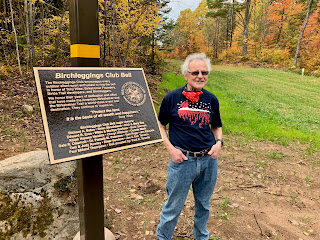 Jim recognized the many people who made the bell possible. Heading up the list was Ben Popp, American Birkebeiner Ski Foundation Executive Director. From the instant the Birchleggings Club asked about the possibility of a bell on the trail to the final bell- dedication event, Ben was behind the project 100%. He enthusiastically supported the concept, the design, the location of the bell, and provided the Birkie Trail Maintenance Crew to us for the heavy earth-moving tasks. Kurt Proctor and his trail crew cleared trees, graded the site, excavated the hole, and did the final grading and landscaping.

A subcommittee of the Birchleggings Club Board spearheaded the project. Dick Enz, Willie Gorham, Gale Otterholt, and Jim Tenorio met and finalized the many details.

Seventeen donors provided the majority of the funds for fabrication and installation of the bell. They are recognized on the plaque that is attached to the bell post. The balance of the costs were paid by the Birchleggings Club.