The Birchleggings Club Lists have all been Updated! 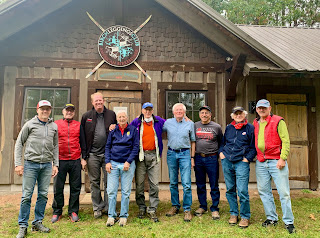 The Annual Meeting of the Birchleggings Club was held at the Birchleggings Mosquito Brook Warming Hut on September 24, 2021, on the Birkie Trail. Before the Meeting Jim Tenorio, with help from Steve Carmazon, Edward Eroe, and Paul Thompson installed three sets of cross country skis in the ceiling and wall. Two of the pairs of skis were from our deceased board member Cheryl Hiltibran to honor her memory. The third pair was from current board member Paul Thompson, in honor of his recent 40th Birkie. Also, before the meeting started, much admiration and appreciation was extended to board member Connie Meek, for her incredible solo progress in staining the exterior walls of the hut a beautiful light blue again. Thank you, Connie! 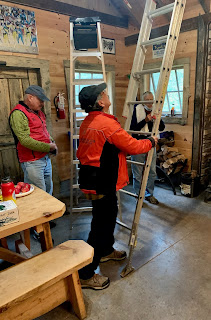 Those present were President Gale Otterholt, newly elected Vice President James Tenorio, Webmaster & Social Media Coordinator Edward Eroe, Secretary Steve Carmazon, Connie Meek, and Paul Thompson. Missing was newly elected board member Ralph Bovard. Treasurer Dave Balsiger, and newly appointed replacement for the last year of Cheryl Hiltibran tenure, was Bob Britz, both of whom attended virtually. Special guests were Birchleggings Club Founder John Kotar, and American Birkebeiner Foundation COO Joe Vadeboncoeur and Development Director Andrew Wall.
The discussion with Joe and Andrew was centered around a Trademark Licensing Agreement between the American Birkebeiner Foundation and the Birchleggings Club spelling out the use of the American Birkebeiner name on the Birchlegger Awards and other duties and responsibilities of both parties. After much discussion the document was formally signed by Joe on behalf of the American Birkebeiner Foundation and Gale on behalf of the Birchleggings Club. Joe and Andrew also updated some initiatives of the Foundation. They include Telemark Development, extending the Birkie Brand for Ski, Bike, Run, and Live, the Birkie One initiative around equity, diversity, inclusivity, gender, race, and underserved populations, Birkie Green initiatives including new Birkie Bibs made of recycled plastic bottles and new solar arrays. 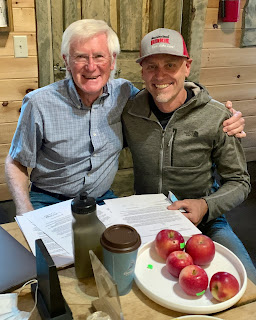 The recent Birchleggings Club Board of Directors election was officially announced, as well as a special appointment to the board, which has resulted in a change of membership on the board. Per the bylaws of the club, one third of the nine directors are elected each year. This year, re-elected to the board were two incumbent board members - Jim Tenoria and Gale Otterhold, and also a non-incumbent member - Ralph Bovard. Ralph is a veteran of 24 Birkies and was our first lifetime member. A big thanks to Tom Rowley, who is leaving the board after having served as a board member, and vice president, since 2013. In a special appointment, Bob Britz will join the board left vacant by the passing of Cheryl Hiltebran last March. Cheryl was first elected in 2019.